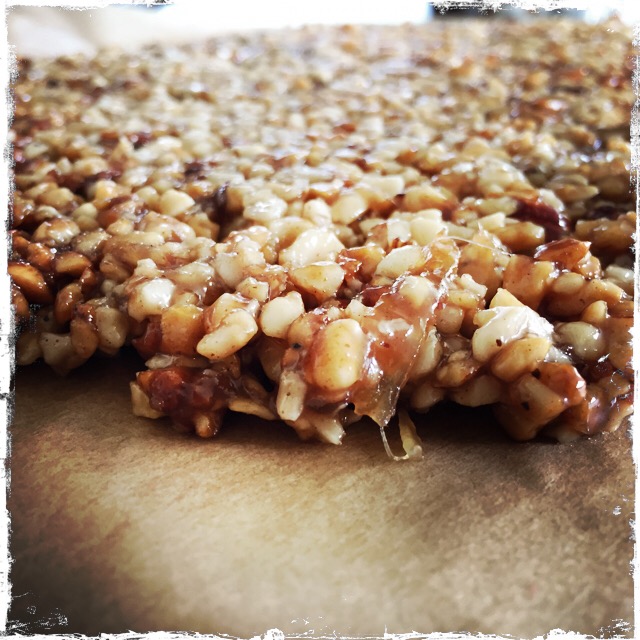 This is my adaptation of a 14th century Italian recipe for nucato, a ridiculously more-ish snack of crushed walnuts cooked in honey and spices, and cut into bite-size squares. Walnuts have been eaten by humans for thousands of years and were prized in medieval cuisine both for oil and for making sauces and adding to meat dishes… although eating too many was thought to be bad for the mouth…

The modern recipe for nucato was developed by Odile Redon et al. in what I find to be one of the better ‘modern medieval cookbooks’ around – The Medieval Kitchen – but here I gave it a twist by replacing Redon’s honey and spices with my Candied Root Ginger in Spiced Honey… and the results were spot-on what I was hoping for. Sticky, spicy, chewy squares of nutty goodness, with the occasional hit in the form of a ribbon of candied ginger. The perfect mid-afternoon pick-me-up.

Substantially increasing the honey content and spreading it out over a larger surface area to set would make brittle… bricato?…perhaps topped off with some smoked sea salt to finish? Hmm. Watch this space.

Slowly warm the honey in a deep, wide pan until it begins to boil. Add the chopped nuts and mix thoroughly. Cook over a low heat for about 30-45 minutes, stirring regularly to stop the nuts sticking to the bottom of the pan. Be careful that the heat is not too high: you don’t want the nuts to darken and burn – they’ll taste nasty and bitter. Redon suggests that the mixture is done when the nuts start to “pop” from the heat of the honey, but I have to say that my nuts didn’t pop, and it still worked perfectly.

After 45 minutes, take the pan off the heat and spoon the nut mixture onto a large sheet of greaseproof paper – approx. 40 x 25cm. Spread it out using the cut side of half the lemon, to a thickness of about 1.5cm. Leave to cool to room temperature, and then pop it in the fridge until you’re ready to cut it into squares. Once cut, the nucato will keep for about 10 days in an air-tight container – technically, that is – mine lasted about a day before it had all disappeared!