Dining at The Jews House, Lincoln

Posted by rvmatthews on April 24, 2015 in Eating Out |No Comments

Locating modern restaurants housed in medieval buildings is a great game, but the rules are strict. For a restaurant to sweep the board, the building has to have both retained its medieval character and be well thought out as a modern dining space, and it goes without saying that the food has to be good. You can advance to Go and Collect £200 if medieval cuisine gets a look in, but then the same rules apply as they do to the building. Finding medieval-inspired food on the menu is always fun, but it only gets the bonus points if it manages to straddle that slippery fence demarcating the subjective fields of ‘authentic reproduction’ and ‘gastronomic delight.’ 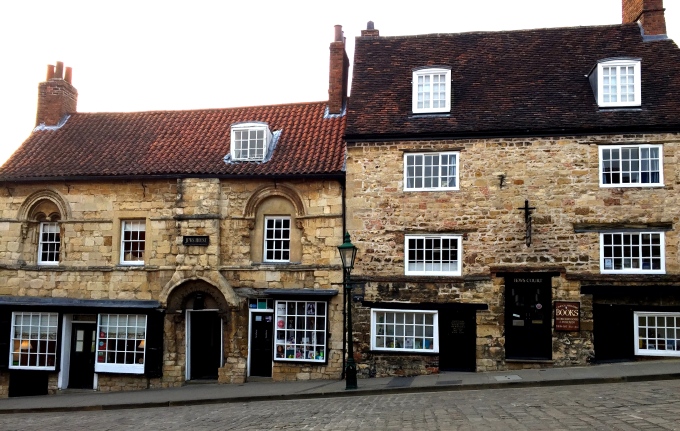 The Jews House (to the left)

A recent overnight stop in Lincoln meant an opportunity to put the rules of my game to the test. Lincoln is a medievalist’s paradise: Romanesque arches on every corner; a Norman castle fit for kings and convicts alike, and a cathedral that John Ruskin named ‘the most precious piece of architecture on the British Isles.’ Where old Lincoln tumbles down the hill to meet new Lincoln (down a cobbled street named ‘Steep Hill’, an understatement, if ever I heard one) is The Strait, once the Jewish quarter of the city and now home to a myriad of speciality, vintage and retro shops. If you can tear yourself away from the independent bookshops, you’ll find the The Jews House here too, a modern restaurant housed in the oldest extant domestic building in Britain, dating from 1158 (safely through the qualifying round). 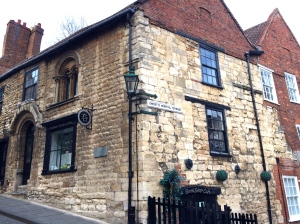 Although the building has been modified considerably over time, much of the upper storey facade survives from the twelfth century: the double-arch romanesque windows and the chimney breast serving a fireplace on the upper floor which splits to form an ornately carved archway over the front door. Although the pillars supporting the archway have long gone, it’s not hard to see that this merchant’s house would have been one of the largest and most luxurious buildings in the area, and no surprise. This was the Kensington Palace Gardens of its day, where residents had serious cash to flash. Aaron of Lincoln (c.1125-1186), a Jewish financier and reputed to be wealthiest man in Norman England, lived only footsteps away up The Strait: these were neighbours to impress.

Nine hundred years later, making an impression is still high on the agenda, in the form of The Jews House restaurant and its offering. We had booked for a Friday evening and were taken immediately to a table upstairs, where the medieval hall would originally have been.  The menu was short – a choice of 5 starters and 5 mains – but what it lacked in length, each dish made up for in terms of complexity: this is an ambitious kitchen at work.  I opted for warm asparagus, crispy duck egg, beurre noisette mayonnaise and chicken reduction to start, followed by roast guinea fowl on pasta with morels, peas, fresh spring truffle and a wild garlic sauce… with hindsight, I should have kept my fingers out of the bread basket beforehand. But when the warmed house breads arrived, parcelled in a little hessian sack (nice touch), it was hard to resist having a rummage. And there weren’t just artisan rolls to be found – I also found the secret to keeping the rolls warm whilst on the table: a bag of hot marbles nestled at the bottom. Genius. 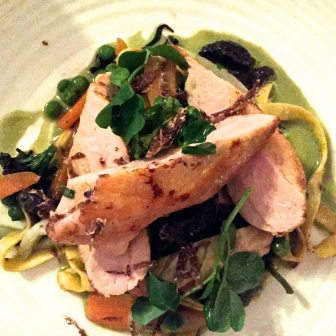 After such a feast of spring flavours, we couldn’t manage dessert, much though I wanted to prolong our stay and delay the prospect of climbing the hill back to the old town and to our hotel. The Jews House had excelled in the game of modern eats in medieval eateries, and the food, service and atmosphere were certainly in-keeping with the opulence and luxury that the building’s former occupiers would no doubt have also enjoyed. Given it’s place in medieval history, it would be wonderful to see what The Jews House chef Gavin Aitkenhead and his team could do with a few twelfth-century culinary touches here and there. If the contents of his hessian bags are anything to go by, the results would be pretty special.

A few photographs of the carvings on the west facade at Lincoln Cathedral, the traditional entry point. Incredible detail, although the last one is perhaps a little too graphic!